We would love for you to join us on this magnificent cruise experiencing an incredible itinerary.
We will gather for regular devotions, incredible experiences and lots of R&R.
~ Neil & Kate

Experience some of the most historic and revered places that have shaped civilization, from Athens and Rhodes to Jerusalem, on this journey through the cultural, spiritual and philosophical touchstones of the Mediterranean.

Rome, Italy -Travel to Rome and revel in the magnificent monuments, from the ancient Roman Forum and Coliseum to the splendor of St. Peter’s Basilica with Michelangelo’s Pietà and his breathtaking frescoes in the Sistine Chapel. Or enjoy a drive through the lush farmlands of the Roman countryside to lovely medieval Castelgandolfo.

Catania Italy – Destroyed by an earthquake in the 17th century, Catania has been beautifully restored and offers ancient churches, castles and amphitheaters, lush gardens and lovely palazzos to explore. Tour the 13th century Ursino Castle, which was situated along the coast until earthquakes and volcanic eruptions transformed the landscape. Drive inland through picturesque villages and explore Villa Romana del Casale, a 4th century villa and UNESCO World Heritage Site containing a complex collection of Roman mosaics considered one of the finest in the Roman world.

Athens, (Piraeus) Greece – Climb up the magnificent Acropolis and stand in awe of the Parthenon, the beautiful temples and the view over Athens stretched out before you. See city highlights including the new and old Olympic stadiums. Journey to Cape Sounion and the temple of Poseidon overlooking the sea, or visit ancient Corinth and the narrow Corinth Canal cut through miles of solid rock.

Santorini Greece – Visit the beautiful whitewashed hilltop towns of Oia and Fira and their breathtaking views of the caldera below. See the stunning artifacts in Fira’s museum, including recent finds from the excavation of Akrotiri, thought by many to be the legendary city of Atlantis, or visit a winery. Stroll through the winding streets with fantastic views around every corner.

Rhodes Greece  -Enjoy a walking tour of the old fortified city and stand in awe of the impressive Grand Master’s Palace. See where the Colossus of Rhodes once stood and savor the charm of this remarkable walled town. Or drive along the scenic coast to Lindos. Enjoy the whitewashed little town and climb to the ancient acropolis, its temples and wonderful views.

Alanya Turkey -Alanya rose to prominence during the Middle Ages under the Seljuks, a tribe from central Asia that built the fortress and protective wall that still dominate the city. Several other buildings from that time also remain, including the octagonal Red Tower and the Seljuk Shipyard. Thousands of archaeological pieces in the Alanya Museum attest to the city’s importance through the ages. But history only touches on Alanya’s considerable allure. The city sits on a lovely gulf, backed by the pine-forested Taurus Mountains on Turkey’s beautiful Mediterranean coast.

Limassol Cyprus -Limassol is the jumping off point to explore the ancient riches of Cyprus. See ruins, majestic mountains and scenery, stunning beaches, and vast groves of lemons, oranges and olives. Visit Lemesos Castle, where Richard the Lionheart married Berengaria of Navarre, and its fascinating museum. Or stroll through ancient Curium and admire its stunning mosaics, theater, basilica and panoramic views over the sea. Venture inland to Nicosia and its wonders like the Cathedral of St. John, the Venetian fortifications, a restored old town and mosque, and the Cyprus Museum

Jerusalem, (Ashdod) Israel – For Christians, Jews and Muslims, Jerusalem is one of the holiest cities on earth, and it is also one of the oldest. Early Bronze Age tools and writings show that Jerusalem has been settled since the 4th millennium B.C. Marvel at the beauty of the Dome of the Rock and the Church of the Holy Sepulchre in the walled Old City of Jerusalem, as you stroll through winding streets where people have lived for centuries.

Jerusalem, (Haifa) Israel – Visit the land of miracles – Galilee, the Jordan River, the Mount of the Beautitudes and Tabgha. Venture to Nazareth, home of the young Jesus. See the largest hanging gardens in the world at the Bahai Gardens of Haifa. Or visit the Nahalal Moshav, a commune established in 1921 by Jewish immigrants. 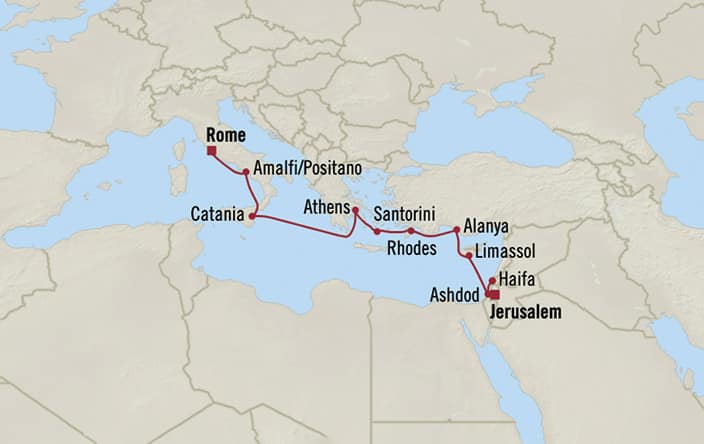 Pricing subject to change without notice. Email Joanne for updated pricing and availability